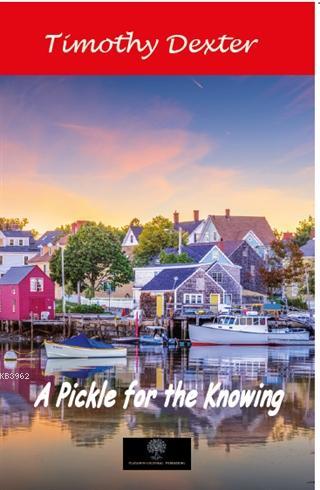 Emeği Geçenler :
A Pickle For The Knowing

Timothy Dexter, the a author of the following curious and unique production, entitled A Pickle for the Knowing Ones, which is here re-printed verbatim et spellatim from the original edition, was born in Malden, January 22, 1747. Having served an apprenticeship with a leather dresser, he commenced business in Newburyport shortly after he was one and twenty, and being industrious and economical, he soon found himself in good circumstan-ces. In the year 1770 he married, and receiving a conside-rable amount of money with his wife, he was thus put in possession of a moderate fortune. In 1776 he had for one of his apprenti­ces the no less eccentric, and afterwards the no less noted Jonathan Plumer, jun., travelling pre-acher, physician and poet, as he was accustomed to style himself, and of whom we shall hereafter speak. In addi-tion to his regular business of selling leather breeches, gloves soutabel for wimen's ware, &c. he engaged in commercial speculations, and in various kinds of busi-ness, and was unusually successful.